“The decarbonisation of global energy sources is the only available means of effective mitigation of global CO2 emissions while still allowing society to grow as it has done historically.”

WHAT:  Finding a mathematical relationship between social actions for carbon emissions mitigation and global temperature change

We all get the idea that the actions of people and society as a whole (particularly in the first world) are causing climate change. Or at least we should get that by now. Humans are burning the fossil fuels which are polluting our atmosphere. It’s pretty tightly linked. But these researchers weren’t just content with sitting back and assuming everybody got that link. So they went about proving it mathematically. Yay for maths nerds!

The researchers figured that since global temperature changes are linked with increased CO2 emissions, then you should be able to work out how much effect social actions to prevent global warming have on global temperature changes. And if you can measure those effects, then it can create positive feedbacks to keep us all going in the same way getting on the scales and seeing a smaller number can keep you motivated to keep doing the hard yards in the gym.

For those that have a thing for algebra, it looks like this: 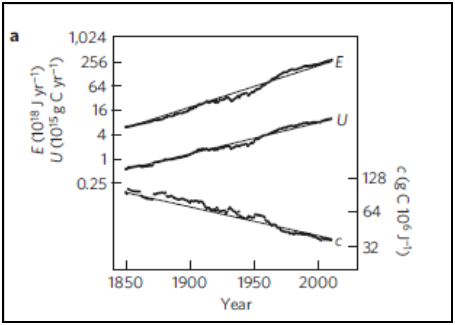 Energy use and carbon emissions increase, carbon intensity goes down as energy mix changes (from paper)

The good news is the mitigation rate (the rate that carbon emissions are decreasing from social actions) from changing the mix of energy use in the world and ramping up renewables has increased from ≈3% per year in 1990 to ≈15% per year in 2010 making our growing pollution a little bit less carbon intensive. And modest levels of feedback can make larger impacts in terms of mitigating climate change.

The bad news is, in the scheme of things we’re currently doing squat. We’re getting into the gym and looking at the scheduled hill-climb program and skipping it to just saunter on the treadmill and not break a sweat. In order to meet the targets notionally set in the UNFCCC Durban negotiations in 2011, we’re going to have to be 50 times more effective in how we’re reducing our carbon consumption. Yeah that’s right, I said fifty.

Even worse – while small changes have large effects to begin with, their effectiveness tapers off really quickly. Think about it – the first time you try and run 3km it feels like a marathon. After a few weeks of training, it’s your warm up. And so far, the researchers have found that the climate-society feedbacks have been too weak to change business as usual pollution growth.

So what’s the point? Were they just getting funky with their algebra to make us feel bad about doing nothing? No – there’s a useful application for the relationship between social action and climate mitigation.

Climate change is a moving target. You can never quite be sure exactly how it’s going to play out – it’s non-linear (unpredictable), and the consequences change depending on what we do about it. Which means the more we wake up to the realities of climate change and start actually getting our asses in gear, the more information we’ll need to be able to make policy and business decisions on what to do next.

If you can utilise the climate-society feedback link, then you can analyse how effective the action has been and where the next target should be as it changes – it’s climate change real time tracking in the same way I know I need to pick up the pace in the gym if my last km was slower. 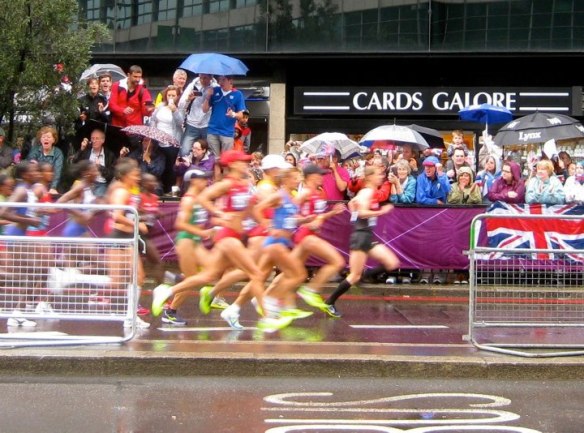 As the researchers say in the quote from the top of the blog “the decarbonisation of global energy sources is the only available means of effective mitigation of global CO2 emissions while still allowing society to grow as it has done historically.”

Our choices are – ignore it and hope the reality never hits you (which it will anyway), or get into gear and onto that treadmill. I know which one I’m choosing.

1 thought on “Getting into gear: required rates of climate action”