WHAT: ‘Blue Carbon’ report looking at how carbon is stored in oceans

WHERE: Sierra Club BC – in print and online

TITLE: Blue Carbon British Columbia: The Case for the Conservation and Enhancement of Estuarine Processes and Sediments in B.C.

Since I’ve moved to Canada, I’ve learnt a lot about salmon and it’s a pretty tough gig from what I can tell. Everyone wants to eat you along the way (including humans like me – yum!) and evolution decided it would be a good idea to swim up the river – way to make it harder! 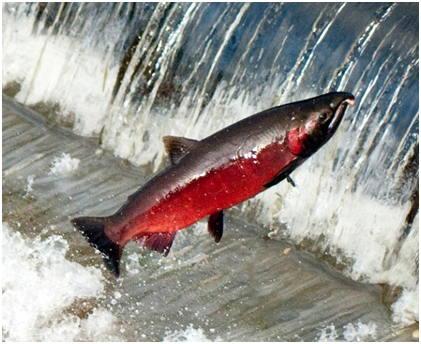 But even harder again – once baby salmon have hatched and are swimming back down the river to eat and grow and become edible for me, they have to also make the switch into salt water which is impressive in any animal.

Changing from fresh water to salt water as a fish takes a whole heap of osmoregulation, which is the transfer of water into and out of your cells to keep an even salt balance on both sides of the cell membrane. When there’s too much salt on one side, the water moves to dilute it, which is the reason we feel dehydrated after eating a lot of salty food. So a salmon changing to salt water would be like you or I changing to only drinking salt water instead of fresh water. Salmon can do this, we would not survive.

How do salmon do this? Well it involves estuaries. Estuaries are the underwater grasslands at river mouths which look pretty gross to walk through in your bare feet when you’re going swimming. But if you’re a salmon, it’s your training ground. Salmon will hang out in estuaries full of eelgrass or salt marshes for a week or two until their bodies switch to salt water. The area is full of microbes dissolved in the water for the salmon to eat and the eelgrass provides a great hiding place for salmon that aren’t yet fast enough to swim away from everyone who wants to eat it. Without estuaries, the salmon race down the river and shoot straight out into the salt water, which is quite a shock to their systems. 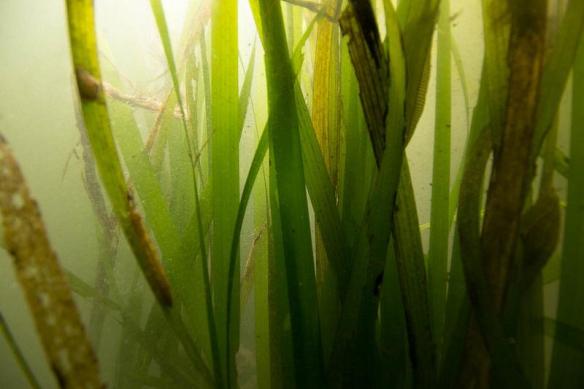 This paper from the Sierra Club here in British Columbia talks about estuaries other feature – they’re great carbon sinks, and we need more of them. Carbon moves around our planet in a cycle with sources and sinks. Humans burning fossil fuels are a huge source of it and the sinks can’t keep up the balance (hence ocean acidification and global warming). So the more carbon sinks we can preserve and create the better for our survival.

Because eelgrass, mangroves and salt marshes are in the shallow water, they get lots of sunlight, which allows them to photosynthesise. 1km2 of mangroves can store the same amount of carbon as 50km2 of tropical rainforest and estuaries are constantly sucking carbon dioxide in, and releasing oxygen while pushing carbon further down into the sediment on the ocean floor.

They suck carbon in, send oxygen out and provide a training ground for animals – so far there’s no downside.Except that many estuaries have been or are being reduced by human development. In the Fraser River here in Vancouver alone, 99% of the delta marshlands are gone due to flood prevention dyking, farmland or development. That’s a whole lot of carbon that could be sucked into the estuary that isn’t.

Currently, it’s estimated that BC estuaries sequester 180,200 tonnes of carbon per year, even with their diminished size due to humans. When you realise that Metro Vancouver’s carbon emissions were 10.5 million tonnes in 2010, estuaries take up 1.7% of our emissions each year. If we keep burning carbon, we will need a lot more estuaries. Additional benefit for our own self interest as well of course is that more estuaries means bigger salmon runs and more delicious food for us, the bears, the seals, the whales, the eagles and all the rest.

As Vancouver aims for its 2020 Greenest City targets, one of the most efficient ways of sequestering more carbon while also reducing our emissions might not be our forests, but our underwater forests – the tidal estuaries.

1 thought on “The Forests of Planet Ocean”