WHAT: A rapid response model to assess the risk of coastal areas to climate change sea level rise and flooding

This paper has the honour of including the most complicated description of flooding I’ve ever read. Are you ready? ‘upward and landward movement of the cross-shore coastal profile, resulting in coastline recession.’ Which is scientist for sea level rise floods the beach.

Anyhow, I thought this paper would be somewhat topical, given the damage Frankenstorm Sandy caused on the East Coast of the USA last month. The researchers have developed a model that can run multiple simulations of coastal impacts due to climate change  quickly, making it useful for local coastal risk management.

The model only works specifically with coastline areas that are less than 25km long and are barrier estuaries along sandy coasts with microtidal environments. Sounds really specific? It’s actually 50% of the world’s coastlines. Which instantly makes this tool seriously useful and very practical.

Their model is part of a larger worldwide modelling project called the Dynamic and Interactive Vulnerability Assessment, which gets huge acronym points from me for being the DIVA initiative.

More seriously, they looked at sea level rise in four areas – the Swan River and Wilson Inlet in Western Australia and the Tu Hien Inlet and Thuan An Inlet in Vietnam and used the A1B and A2 climate change scenarios from the IPCC report to run their model.

For those who haven’t read either the whole IPCC report or missed last week’s post, the A1B scenario is the middle ‘worst case scenario’ option which predicts between 18cm and 79cm of sea level rise. For the purpose of this experiment, the researchers went with the worst case scenario of 80cm which is my desk height. 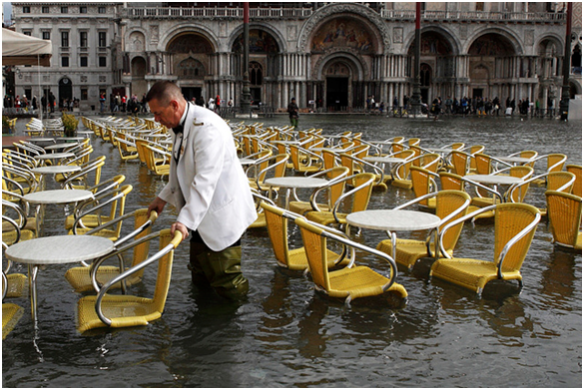 This would be normal tide, not high tide (Roberto Trm, flickr)

They found that while sea level rise itself can be pretty accurately predicted, the problem is sediment. When oceans, bays and rivers all meet, there’s a lot of sediment that gets transported in different directions. And the model run by the researchers found that sea level rise only accounted for around a quarter to a half of the flooding. The rest of it was sediment movement through either the process of basin in-filling where extra sediment gets washed into the bay and decreases the volume of the bay which means that a normal water level is higher, or changes in river runoff due to changes in rainfall patterns.

If half or more of the damage coastal areas can expect from climate change and sea level rise is going to be from sediment changing the shape and depth of the area, this is something that needs to be measured and included in disaster management plans, because just dredging the sediment out can have the perverse effect of increasing flooding by removing the local ecosystems (remember the eelgrass?!) which naturally minimise floods.

Hopefully, in the near future local areas can work with tools like this one to more accurately model the potential risks from climate change, and prepare for them. In the mean time, the rest of us will hopefully wake up to the climate urgency and stop burning carbon before we’ve really ruined everything.

1 thought on “In the Wake of Sandy: Modelling Sea Level Rise”