WHAT: Looking at all the research on groundwater and working out what we know and what we don’t know

Last month, 26 scientists all published a paper together on groundwater, which must have required either some massive Skype sessions, or people getting very sick of email chains where everyone hits ‘reply all’. As I’ve said before: science – it’s a collaborative thing.

What these researchers were trying to do was to work out exactly what we know about groundwater and how it will be affected by climate change and where the gaps are that we need to fill. Having worked in water policy, I can tell you that groundwater is normally the big unknown. Governments and organisations generally don’t have the information to know how much there is, who is taking it at what rates and how to monitor and regulate it. Generally, it gets put off until next time, while surface water rights are dealt with.

However, groundwater is estimated to be one third of all freshwater withdrawals worldwide and also the water source for 42% of the world’s agricultural water. So with climate change affecting rain patterns and shifting weather pole-ward, what will happen to groundwater? Will the well run dry in some places?

One of the biggest issues with measuring groundwater is the rate of recharge for the underground aquifers. These underwater storage vaults of water and mostly ancient water in that if you measure the isotopic composition of the water, they were likely filled thousands of years ago and have remained there without changing greatly.

Another interesting thing the isotopic analysis of the water tells us, is that if you look at the oxygen and hydrogen isotope ratios (so that’s the ratio of atoms that have different numbers of neutrons, making some heavier than others), many aquifers were filled in the late Pleistocene and early Holocene eras, around 12,000 years ago when the average temperature of the earth was around 5oC cooler than now.

Isotopic analysis: Hydrogen on the left and it’s isotope Deuterium (with the extra neutron) on the right

What that means is that if those aquifers were recharging when the world was 5oC cooler than now, it’s unlikely that any recharge is taking place now or going to take place as we continue to heat our world through climate change. As the paper says ‘this non-renewable groundwater exploitation is unsustainable and is mined in a manner similar to oil’. Thousand year old water is just as renewable as million year old oil, and both are longer than a human life span.

So, what do we know about groundwater? There are two ways that groundwater can recharge: rain fed (the rain soaks into the ground) and surface water leakage (from rivers, irrigated agriculture or lakes). Both of these methods will be variable and vulnerable to climate change.

Changes in snow pack and snow distribution also impact recharge. The research currently published is still uncertain as to the extent of the impacts, but early findings are that the early start to spring is reducing the duration of recharge. Glacial retreat also impacts groundwater.

The other affects on groundwater are land use change and sea level rise inundating areas and making them salty. Managed ecosystems are not able to respond to change the way natural ecosystems can. Even if it’s a drought year, a farmer still needs to plant and crop their land. For each degree of climate change, you can roughly estimate that the equivalent climate will move 150km towards the pole. The desert of Salt Lake City will move north into the cropping areas of Idaho, and the slushy snow will move north into the ‘champagne powder’ ski regions.

One interesting thing I learned from this paper that I hadn’t considered before is that groundwater depletion increases sea level rise. How, you may ask? It’s the thing of living in a planetary system where everything is connected, so follow me through the water cycle here:

Thousand year old water that has been stored in the ground is pumped up a well and onto your farm. Some of the water will evaporate and the other water will grow plants, but the water has now gone into the atmospheric water cycle, so the evaporated water goes into the clouds, comes down as rain, and since 70% of our planet is ocean, there’s a really high chance the ancient groundwater will get added to the ocean. How much water? This is where it gets scary. 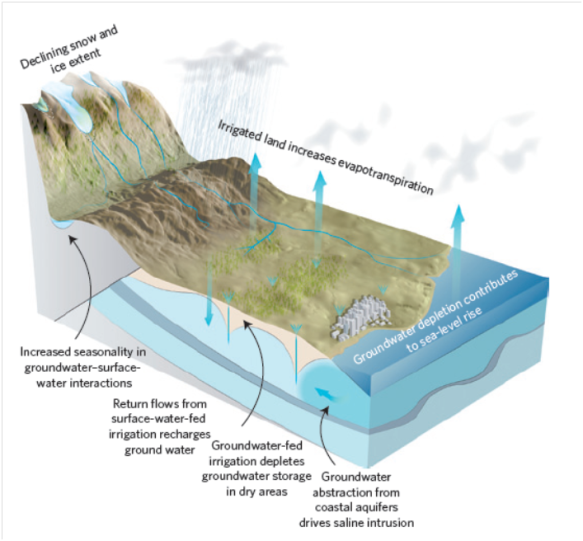 The paper talks about cubic kilometres of water. Yes, kilometres. I was unable to mentally picture that too, so I did a conversion for you. The groundwater depletion for the planet is between 145 – 204km3 of water per year, which is between 145,000 and 204,000 billion litres of water. To visualise this, you’d need to take the island of Manhattan and cover it twice with 1km deep water, which would be a depth of 4.5 Empire State Buildings end to end. This contributes between 0.4-0.5mm of sea level rise each year.

Climate change will have an effect on groundwater resources. Exactly what that is won’t be known until all the data is collected to create detailed models. However, sustainable aquifer management is going to be difficult and grow increasingly difficult as the climate continues to change.