How much and in what ways has the western part of North America warmed from climate change between 1950 and 2005?

WHAT: Collating all of the weather station data from North America west of the Mississippi River and looking at the long term trends.

As we all know, climate change is a global problem with regionally specific impacts. How the climate changes will depend on what your local climate was originally like. So how much has the western end of North America changed from 1950 to 2005? That’s what these researchers in Alberta set out to discover.

Firstly, for this research paper their area of western North America is more than just the Pacific Northwest. They decided to go with everything west of the Mississippi River in the USA and everything west of Manitoba in Canada, which is pretty diverse in terms of climate ranging from desert to mountains to prairies. 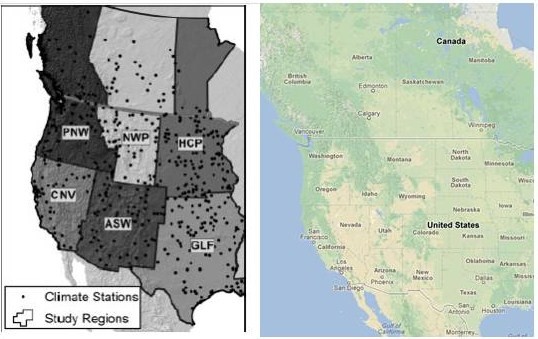 The researchers wanted to look at 50 years worth of data so that they could take out the natural variations like El Niño and La Niña years as well as the Pacific Decadal Oscillation and just focus on the human-caused effects of warming (aka anthropogenic warming for those who like big words).

The researchers looked at several different climate indicators. They counted the number of frost days, the length of the growing season, number of warm days and warm nights, number of wet days (>5mm of rain), very wet days (wetter than >95% of all the other days), daily rain intensity, and annual rain totals.

They noted that while climate change will definitely increase the intensity of the hydrological cycle, the future trends of rain (where it will be, how much there will be) are much more difficult to predict. However, the overall trend found was for rain increasing in the Pacific Northwest (sorry Vancouverites!) more than other areas.

Another interesting thing they found was that natural variability in climate may be masking the effects of climate change in Canada more than in the USA, given the large number of extreme weather events recently observed in the US compared with relatively few extreme events in Canada. Which doesn’t mean we’re getting off scot-free Canada, it means climate change is coming for us later!

There were 490 weather stations that contributed data to the paper, which meant for some massive number crunching, added to the fact that they had to develop an additional computer program to convert all the US measurements into metric (Dear USA, please join the rest of the world and go metric!).

As you can see from the map above, the area was broken down into six different regions and analysed for climate trends. The results were:

The Pacific Northwest saw a significant decrease in frost days at a rate of 2.4 days/decade and a significant increase in warm nights. There was a general increasing trend for all the other measurements – the growing season was extended, and all the rain indicators went up (yeah, winter really is getting wetter Vancouver). The researchers noted that the Pacific Northwest has experienced ‘significant warming’ over the 50 year period, and that the reduction in frost days has severe consequences for Pine Beetle infestations and increasing wildfires. 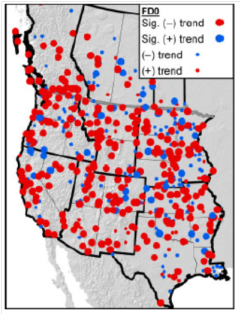 The one exception to the rule was Oregon, where a significant warm and dry patch in the southern part of the state is a sign of the Californian desert climate moving north as the temperature increases. 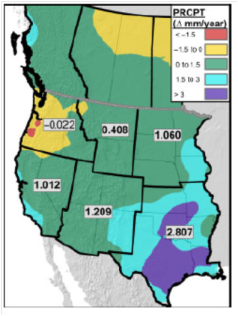 The Northwest plains saw a significant decrease in frost days at a rate of .16 days per year. There was a significant increase in the number of warm days and warm nights, with an increase in all other factors. While the increases in growing season and precipitation are beneficial so far, the researchers noted that continued warming will have detrimental effects on soil moisture and that the earlier spring runoff will pose challenges for water management.

Changes in this area were more extreme than the Pacific Northwest or the plains. There were significant increases in all indicators except for frost days, which saw a significant decrease. The researchers were concerned to note that warm nights are outnumbering cool nights in the continental plains by 5:1. The average rainfall is increasing by .11mm per year which will eventually have serious consequences as the paper notes that most farmland and urban areas in the continental plains are located on flood plains.

Climatically, this one is a real mixed bag going from amazing ski mountains all the way to New Mexican desert. However, there were still some overarching trends. There were significant increases in warm days and nights, rain totals, rain intensity and wet days. There was a significant decrease in frost days and an increase in very wet days and the growing season. The paper noted that while the increase in rain in the Southwest is currently positive, that growing extremes in temperature and the evaporation associated with it will likely negate this factor in the future.

One large concern was the decrease in frost days, given that much of the flow from the Colorado River comes from snowmelt, which was wonderfully understated as:

‘While best management practices may be able to mitigate the risk of widespread system failure, current levels of development in arid areas of the region may be unsustainable.’

This is scientist for ‘you either deal with this now, or something’s going to give in a really nasty way later’. Or, as one of my favourite climate bloggers Joe Romm says ‘Hell and High Water’ which will bring us the next Dust Bowl.

‘A decline in the availability of water supplies may make the current intensive agriculture industry in California’s Central Valley unsustainable in the long term.’

Did you hear that? It’s the sound of your favourite Napa wine grapes shrivelling and dying in the heat. 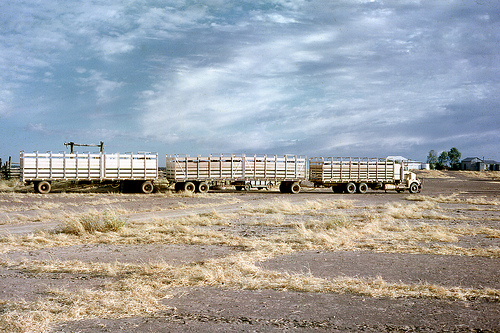 The end of irrigated agriculture in California? (photo: flickr)

So what does this all mean? Well, long story short it means that while we here in Canada aren’t experiencing the worst of climate extremes yet, and while each region of North America will change specifically based on their local climate, we haven’t seen anything yet.

The long term trends are pretty clear for most areas (or at least statistically significant) and the consequences for communities and industries aren’t good. And that’s even before you start to think about non-linear climate responses and ecosystem tipping points. So, for the sake of the wine in Napa, the skiing in the Rockies, the agriculture in the prairies and the people who call New Mexico home, let’s stop burning carbon.

1 thought on “Hot Enough Yet? Warming in Western North America”