Climate change has increased the chance of extreme heatwaves in Australia by more than five times.

WHAT: Looking at how much influence human-caused climate changes are pushing Australian summers into more extreme heat.

There’s some interesting research happening at my alma mater Melbourne University these days (go Melbourne!). Even if you weren’t there to experience the extreme summer of 2012-13 in Australia, I’m sure you all remember the new colour that had to be created by the Australian Bureau of Meteorology for the weather maps when they maxed out above 50oC, or maybe the new rating for bushfires of ‘catastrophic’ for the climate fuelled fires that are beyond just an extreme risk?

The historical data they used for the experiment was from 1850 to 2005, with the baseline climate data (what they used as a reference for ‘normal’) being 1911-1940 because 30 years of weather data makes a climate!

They then created experiments for the data with natural forcing only, with natural and human forcing and ran exciting statistical functions like a probability density function with a kernel smoothing function that almost sounds like a super-cool popcorn maker.

To double check for error, they used the second hottest summer temperatures to make sure they could pick out the human influences from the randomness that can be the data, thereby deliberately making their findings conservative.

Once they’d run their fun popcorn-sounding numbers, they calculated the FAR – Fraction of Attributable Risk, which is exactly what it sounds like – the fraction of the risk of something happening that can attributed to a cause.

So if our ‘bad guy’ is human-induced climate change, how much can we blame it for the Australian Angry Summer of 2012-13? Well, a fair bit.

Extreme heat is ‘substantially more likely’ because of humans burning fossil fuels, which are pretty bold words from research scientists – when there’s a greater than 90% chance of something they say ‘very likely’ where most people would say ‘very certain’. In their research, events that should have been occurring 1-in-16 years naturally were happening 1-in-6 years with the historical numbers and 1-in-2 years with the model out to 2020. Ouch – summer just got more uncomfortable more often. 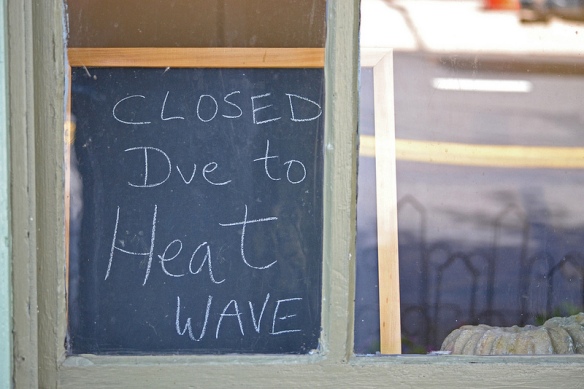 For me, the kicker came when the paper pointed out that the 2012-13 summer in Australia came in a La Niña year. Extreme heat events normally come with an El Niño year – La Niña years are cooler with more rain. So the fact that the Angry Summer occurred in a La Niña year is scary – sea surface temperatures were average or cooler in some places while at the same time the Bureau of Meteorology was scrambling for new map colours.

The paper concludes that their research supports ‘a clear conclusion that anthropogenic climate change had a substantial influence on the extreme summer heat over Australia’ and that these kinds of events are now five times as likely to occur. Welcome to summers on climate change?