WHAT: A review and synthesis of all available peer reviewed studies of marine species changing under climate change.

This paper, with its laundry list of collaborative authors must have had an awesome ‘we got published’ party. However, when you think about what they did – all that data would have taken forever to number crunch, so it’s a good thing it was all hands on deck.

So what were they looking at? They were trying to work out if you can see the fingerprint of climate change in the distribution changes of marine species. And to do that, they looked at all the available studies in the peer reviewed literature that were looking at expected changes for fish and other species in the ocean with climate change. Then, they lined up the predictions with the observed results to see what happened, and it turns out we’ve got some frequent travelling fish.

After getting all the studies together, the researchers had 1,735 different observations for everything from phytoplankton to zooplankton to fish and seabirds from 208 studies of 857 different species. They used all of the data they had which included the changes that lined up with climate change projections, the ones that had no changes and the ones that had unexpected changes. 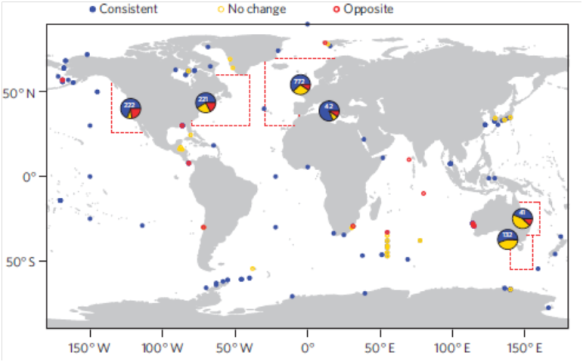 Ocean currents make it easier for species to travel longer distances than plants and animals on land. There’s only so far a seed can travel from the tree with the wind, after all. However in this research they found that the average distance of expansion for marine species was 72km/decade (±13.5km). This doesn’t sound like a lot to a human, but it’s an order of magnitude further than land based migration averages, and it’s a long way for a mollusc or a starfish to go.

The species chalking up the most frequent flier points were phytoplankton which have been moving 469.9km/decade (±115km) followed by the fish who have been moving 227.5km/decade (±76.9km). Of the 1,735 observations, a whopping 1,092 were moving in the directions expected by climate change.

For each species migration, the researchers looked at what the expected decadal rates of ocean temperature change would have been in the area and found that some groups move early, some wait longer, others are falling behind.

For example, in the Bering Sea (where the Discovery Channel show ‘The Deadliest Catch’ was set), many species rely on the really cold water that is less than 2oC and separates the Arctic and subarctic animals. This cold pool of water has been moving further north as the Arctic ice sheet melts, but the responses by species are varied. Some are at the leading edge and move early, others don’t. The researchers think this is related to issues around population size, ability to migrate, dependence on habitat (remember how Nemo’s dad didn’t want to leave the reef?), competition for food and others.

I guess it’s similar to when a natural disaster happens in a human area and some families leave, others rebuild and it’s for a whole complicated list of reasons like family, jobs, resources and more. Anyway, back to the fish.

The researchers tested their data for a climate change fingerprint globally. They used a binomial test against 0.5, which is the result you would get if these changes in location were random variability and from their test, 83% of the changes had climate change as a dominant driving force.

If they limited their data only to studies that were multi-species, there were still 81% of the changes that were driven by climate change. They ran the data to exclude every bias they could think of and still they concluded that it provided ‘convincing evidence that climate change is the primary driver behind the observed biological changes’.

Binomial test results – if you get 0.5 it’s a random occurrence – this migration is climate caused (from paper)

So there you have it – climate refugees aren’t just land based. Nemo’s going to have to move too.