WHO: L.D.D. Harvey, Department of Geography, University of Toronto, Canada

WHAT: Scenarios across all sectors of transport for people and goods and how they can be zero carbon by the year 2100

We need to decarbonise our economy, but what does that actually look like? What do our transit and transport systems look like with zero carbon? Are we all going back to the horse and cart? I don’t think my apartment can fit a horse!

This very very detailed paper from the University of Toronto looked at what might happen, and the general gist of it is that first we need to work really hard to increase the efficiency of all our transport. Once we’ve gotten the energy intensity as low as possible on everything, we need to switch the remaining energy requirements over to different fuel sources (bio fuels, hydrogen fuel cells, electric).

For this paper, the globe was divided into ten socio-economic regions that had different per capita incomes, activity levels, energy intensities, potential for future population growth, income growth and energy levels. Each segment was then analysed for the per capita travel of light duty vehicles (cars, SUVs, pickup trucks), air travel, rail travel and other modes of transport. To further complicate the calculations, there were low growth and high growth scenarios looked at as well.

The data was worked from 2005 and extrapolated out to 2100 and if this kind of large scale number crunching really gets you going, all the spreadsheets that the researcher used are available online here (Climate-OrientedTransportScenarios) for you to do your own zero carbon transport scenarios (thanks to Dr. Harvey for making this available open access). 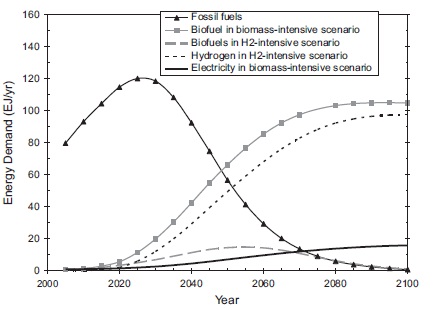 Interestingly, growth in per capita travel relative to GDP growth has halted in several industrialised countries, which makes sense when you think about it – beyond a certain point you end up with more money to travel than time to do it in.

In terms of climate change, the paper assumes we’re able to stabilise the CO2 concentration in the atmosphere at 450ppm. The paper also talks a lot about peak oil and the effect it could have on resource prices and the availability of fossil fuels as fuel. Given that we need to leave 80% of the known fossil fuel reserves on the planet in the ground, I’m not so sure how much effect peak oil may have, but you never know – we could be suicidal enough to try and burn all of it.

Improvements need to be made reducing the weight of cars, improving the engine efficiency and the aerodynamics. Passenger space will increase so we can transport more people per car, air conditioning becomes more efficient (and necessary in some places because of climate change) and hybrid electric cars replace fossil fuel cars for urban driving. Fuel consumption drops from 10.4L/100km in 2005 to 1-2L/100km (of a biofuel) in 2100.

While I was really hoping the paper would tell me of the demise of ugly giant pickup trucks, sadly it looks like we may keep them and they’ll become hydrogen fuel cell monster trucks.

The efficiency of planes is expected to increase by 20% from 2000 – 2020, with a 1% per year efficiency gain every year after that. The International Civil Aviation Organisation (ICAO) has already announced they’re aiming for 2% per year efficiency to 2050, so this one isn’t too far from reality. However, the paper points out that this will probably require a radical change in aircraft design, and a possible switch to plant oils or animal fat biomass-based fuel beyond that.

Freight trains need to reduce their weight, improve their engine efficiency, develop diesel-electric hybrid drive trains and get clever about load configuration to maximise efficiency. The energy requirement of tractors and other long haul trailers also needs to be reduced.

Marine freight is an interesting one. The paper points out that the majority of the world’s shipping is currently oil, coal and other bulk materials like iron ore. Obviously, none of this will need to be shipped anywhere in a zero carbon world, because we won’t need it. Mostly, marine freight will reduce the energy intensity of ships, and future transport will be made up of 60% container ships, 20% bulk ships, 10% general cargo ships and 10% biofuel supertankers.

The paper also looks at some ‘Green Scenarios’ which are the ones where we actually get ourselves into gear seriously to decarbonise (and hopefully stop having the endless debate about whether climate change is ‘real’).

The green scenarios have additional reduced total passenger travel with truck and air travel compensated by rail and other travel modes. There’s also an extra 20% decrease in global freight, which makes me hope people become more minimalist and have less junk in this future scenario? (I can dream!)

Initially, the greatest demand for biofuels are cars, but by 2035 freight is the biggest biofuel user, so maybe we’ve started to also become more clever in the way we plan urban areas with density and rapid transit too? (I think I like this future planet!)

The paper concludes that we need new urban development with higher density, more walkable, bikable and transit friendly options as well as making energy intensity reductions in all forms of transport and then switching the remaining fossil fuels to hydrogen or biofuel. This will go hand in hand with engine efficiency increases as well as battery technology improvements.

The key thing I took away from this paper is that we need to be doing ALL of this. We can’t just drive an electric car and still have our books from Amazon.com shipped here on an old, inefficient cargo ship belching fossil fuels. We also can’t fix one single transport sector and wash our hands of it saying ‘there- I fixed climate change!’

Climate change will affect everything, regardless of whether we actually do something about it or not. So we need to change the way we do everything to do it without carbon.