The volume of Arctic sea ice is reducing faster than the area of sea ice, further speeding the arctic death spiral.

WHAT: Measuring the volume of polar ice melt

Much has been written about the Arctic Death Spiral of sea ice melting each spring and summer, with many researchers attempting to model and predict exactly how fast the sea ice is melting and when we will get the horrifying reality of an ice-free summer Arctic.

But is it just melting at the edges? Or is the thickness, and therefore the volume of sea ice being reduced as well? That’s what these researchers set out to try and find out using satellite data from CryoSat-2 (Science with satellites!).

The researchers used satellite radar altimeter measurements of sea ice thickness, and then compared their results with measured in-situ data as well as other Arctic sea ice models.

A loss of volume in Arctic sea ice is a signifier of changes in the heat exchange between the ice, ocean and atmosphere, and most global climate models predict a decrease in sea ice volume of 3.4% per decade which is larger than the predicted 2.4% per decade of sea ice area. 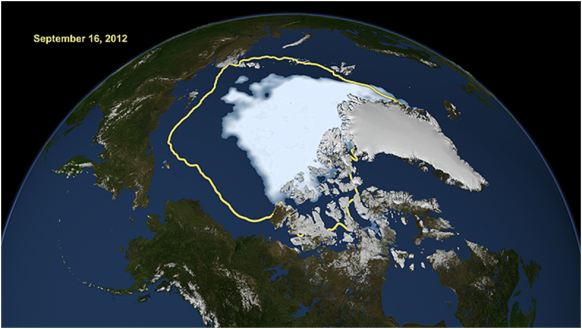 The researchers ran their numbers for ice volume in winter 2010/11 and winter 2011/12, and then used the recorded data sets to check the accuracy of their satellites (calibration for my fellow science nerds).

The most striking thing they found was a much greater loss of ice thickness in the north of Greenland and the Canadian Archipelago. Additionally, they found that the first year ice was thinner in autumn, which made it harder to catch up to average thickness during the winter, and made greater melting easier in summer.

Interestingly, they found that there was additional ice growth in winter between 2010-12 (7,500km3) compared to 2003-08 (5,000km3), which makes for an extra 36cm of ice growth in the winter. Unfortunately the increased summer melt is much greater than the extra growth, so it’s not adding to the overall thickness of the sea ice.

For the period of 2010-12 the satellite measured rate of decline in autumn sea ice was 60% greater than the predicted decline using PIOMAS (Panarctic Ice Ocean Modeling and Assimilation System). Most researchers when seeing results like that might hope that there’s an error, however when measured against the recorded data, the CryoSat-2 data was within 0.1 metres of accuracy. So while astounding, the 60% greater than expected loss of sea ice thickness is pretty spot on.

The researchers think that lower ice thickness at the end of winter in February and March could be contributing to the scarily low September minimums in the arctic death spiral, but the greatest risk here is that the ever increasing melt rate of ice in the arctic could take the climate beyond a tipping point where climate change is both irreversible and uncontrollable in a way we are unable to adapt to. 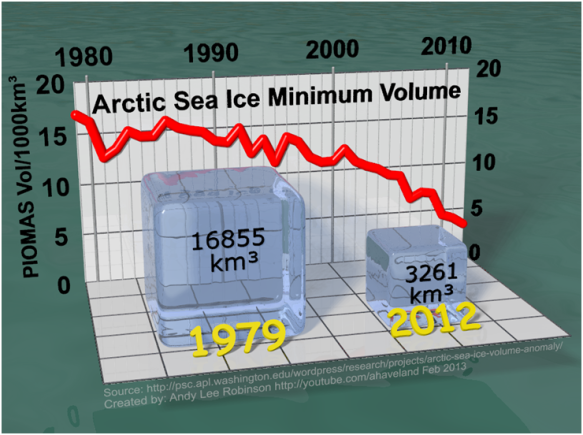 So as usual, my remedy for all of this is: stop burning carbon.